1Over the past year, Wynwood business owners and residents have been voicing serious and legitimate complaints to City of Miami officials about the non-enforcement of repeated and multiple zoning code and noise ordinance violations at Mana Wynwood, which have negatively impacted local businesses who play by the rules. In response to these reasonable concerns, the City of Miami enforced existing rules and closed The Wynwood Marketplace until it complies with the same rules, regulations, and ordinances that govern all businesses in our neighborhood. Since then, rather than comply with the rules, Mr. Moishe Mana has launched a smear campaign rife with misinformation, exaggeration, and personal threats, in an apparent effort to intimidate City and Police officials into ignoring the obvious violations on his property.

We want to make it very clear: the Wynwood BID has never “proposed” closing nightlife venues, or any type of bonafide businesses for that matter, in our neighborhood at 11pm. To the contrary, we are opposed to an 11pm closure. In fact, over the past several years, the BID has and continues to be the strongest advocate working on behalf of our restaurants, bars and nightlife venues to ensure that the City of Miami Commission extends alcohol hours until 5am in Wynwood on an annual basis during Art Week, New Year’s and Music Week, as well as last month’s Super Bowl. That said, we firmly believe that if everyone does their part to follow the rules and support the vibrant nature of our neighborhood, all stakeholders—including emerging residential developments—can thrive in Wynwood.

Mr. Mana is a respected commercial property owner in the City of Miami and has always been welcomed to share his personal opinions with the Wynwood BID. In fact, several of Mr. Mana’s senior executives have and continue to serve on the BID’s Board of Directors. It should be noted that these executives have voted unanimously alongside fellow BID Board members on just about every single vote taken in the history of the organization. These hard-working and respected Mana executives, alongside the rest of the Board, have also given nearly perfect scores when evaluating the annual performance of our Executive Director. That’s why it’s deeply disturbing that Mr. Mana and his associates have taken such divisive actions in lieu of fostering respectful and productive discussions with commercial property and business owners to alleviate the legitimate concerns of the community that the rules do not seem to apply to Mr. Mana.

Regrettably, Mr. Mana has taken it upon himself to send threatening phone calls and text messages to the BID’s Executive Director (as seen below). 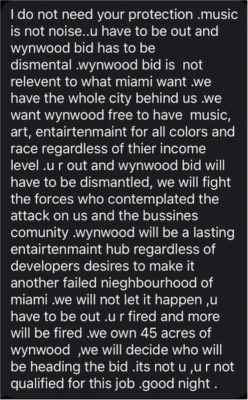 Additionally, Mr. Mana shared via his press release a distaste of Wynwood’s Miami Police Commander and efforts by law enforcement to serve the public welfare of our community in an equitable manner. These threats are an assault against well-meaning public servants who are simply trying to do the right thing and apply the rules equally to everyone. As a result, our Executive Director has been forced to file for whistleblower protection with the City of Miami.

We accept that, as in any community, there will be differences of opinion among well-intentioned business owners and residents as to the state of our district, the direction it’s headed and policy changes that merit consideration to ensure Wynwood continues to flourish. That’s why the Wynwood BID was created in the first place—to foster community, build consensus, and plan for Wynwood’s future. It all begins and ends with the simple premise that working together, with a shared vision, we can and will continue to proudly lead the renaissance of our 50-city block district.

Please note that a special, emergency meeting of the Wynwood BID Board of Directors has been publicly noticed and scheduled for Tuesday, March 3rd at 9am at The Light Box at Goldman Warehouse (404 NW 26th Street). All Wynwood business and commercial property owners are encouraged to attend.