The final #MPDArtCar in front of Abstrk’s work in the RC Cola Plant.

Just in time for National Night Out, an annual event designed to strengthen ties between police and the communities they serve, the City of Miami Police Department unveiled a colorful new addition to their fleet. The Miami Police Department Art Car – designed by Miami-based street artist Abstrk – is unlike any other police car in America and perfectly reflects the unmistakable street art of the Wynwood neighborhood it will serve.

Wynwood Commander Dan Kerr, who spearheaded the initiative, explains, “I wanted to build a bridge with the street artist community. They are responsible for transforming Wynwood into an international destination.”

Abstrk painting his signature eye on the hood.

The collaborative piece began with an email to Wynwood community leaders titled, “Who wants to paint a police car?” Soon after, community partners including the Wynwood Business Improvement District (BID), Miami Police Athletic League (PAL), and Goldman Global Arts came together to make the first-ever #MPDartcar a reality. Commander Kerr had only two conditions: the car needed to be designed by a local Miami artist and needed to be ready in time for National Night Out. 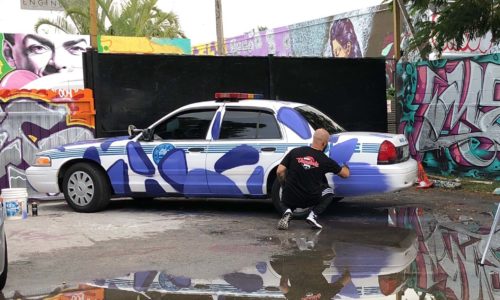 Abstrk working on the body of the car.

When the Goldman Global Arts team sat down to decide who would be right artist for the project, Abstrk quickly emerged as the unanimous decision. The Cuban-American artist is well-known for his work in Wynwood, which adorns the exterior walls of the neighborhood’s trademark warehouses.

“Abstrk was immediately up for the challenge and was the best artist to showcase the rich culture of Wynwood,” said Troy Kelley of Goldman Global Arts.

In three days, he transformed the standard blue and white MPD squad car with the help of 004 Connec paint supplies. The MPD Art Car showcases his abstract, geometric style and signature eye. Once the rolling mural was complete, the car was sent to the shop to get its official City of Miami Police seal and rims so it could patrol Wynwood in style.

The final #MPDArtCar in front of Abstrk’s work in the RC Cola Plant.

Wynwood’s newest mural is a true community effort and fulfills the mission of National Night Out. Throughout the process, Commander Kerr was able to connect and build relationships with street artists and merchants in the community his unit serves. The MPD Art Car is a testament to how Wynwood street artists and police are working together to elevate Miami’s urban arts district.